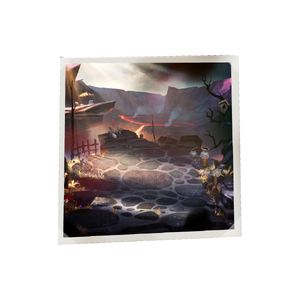 Black Crater is a region of Bird Island, divided into three zones.

This region is one massive crater. Once a huge mountain stood here, but it was destroyed in a war between the bird tribes when their anger got out of hand. Now the region is held as a daunting reminder of the 'dark side' of anger. Later the black bird tribe located here, as they are fond of explosions. It is now a memorial for the danger of uncontrolled anger and a holy site for ancient Angry Birds. The area is barren of vegetation with wide rivers of lava and bubbling mud which the pig tourists have re-purposed as spas. Beyond the edge of the crate lies the ancient site of Birdtopia, the former capital of the ancient angry birds. It is now in ruins, but a mysterious member of the Eagle Force, Dr. Strangebird, uses it as a location for his anger research laboratory.